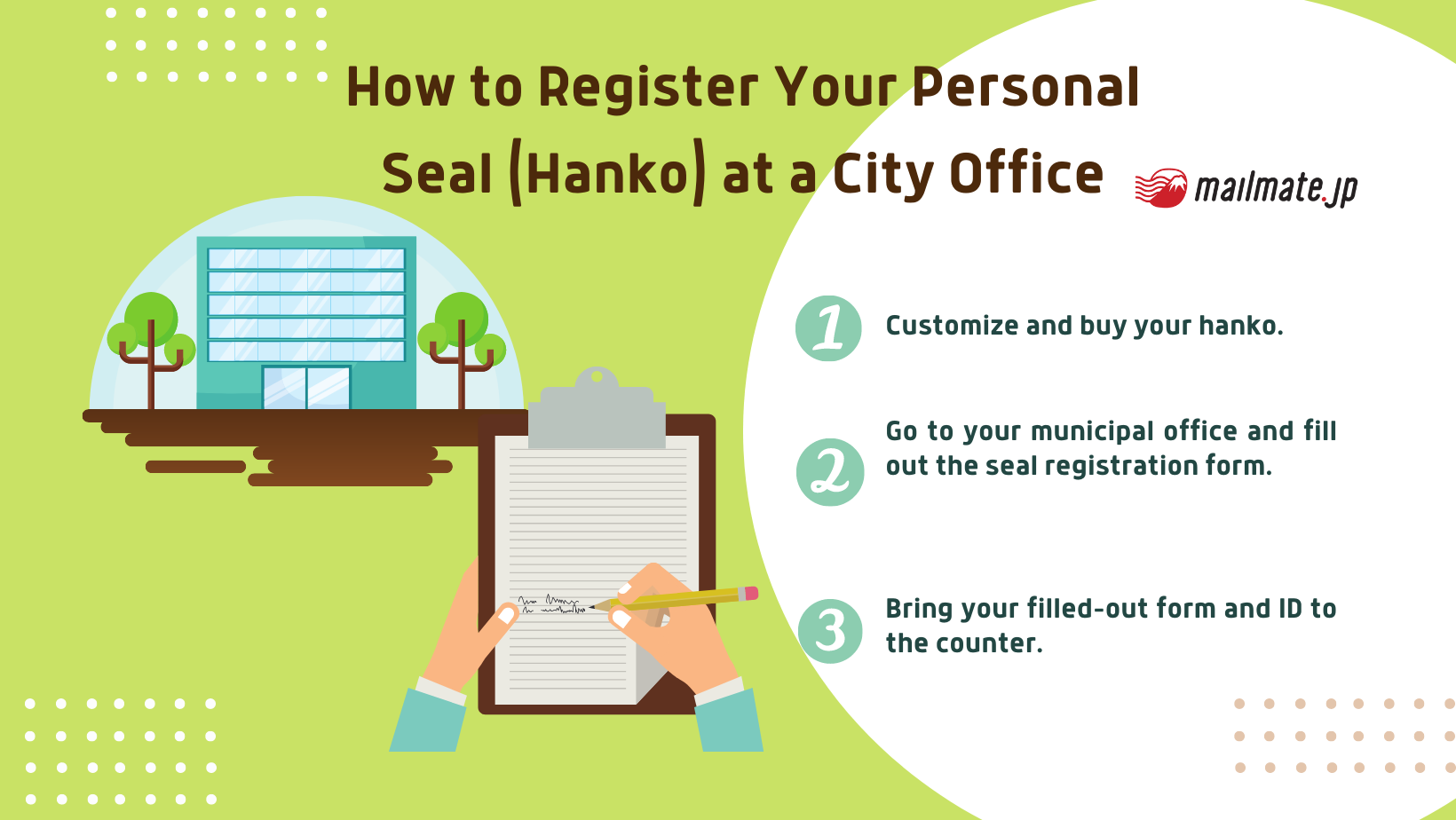 If you've spent time in Japan, you have probably come across the term "hanko" or seen its unmistakable red impression on official documents.

A hanko is a personal seal engraved with an individual or organization's name. In Japan, people use a hanko in place of a written signature for many occasions, such as signing contracts, receiving parcels, and starting a company.

This article will explain how to register a seal at a city office and the different types of hanko typically used in everyday life in Japan.

Wait—aren’t hanko obsolete? Do I need to make one?

Although Japan is considered one of the more technologically advanced nations in the world, it still relies heavily on in-person handling and stamping of official documents and an old-school pen-and-paper approach for daily life and business.

However, written or digital signatures are becoming more commonly accepted, and there's a push to end the requirement of using personal seals to further digitization efforts.

The requirement for seals has also come under fire during the coronavirus pandemic, which forced teleworking employees to commute to their offices to stamp contracts and proposals.

For now, using a hanko remains part of life in Japan, and having one can make your life much easier, especially if you plan on staying long-term.

Inkan vs. hanko: what’s the difference?

Today, native Japanese speakers use the word inkan and hanko interchangeably. In reality, they mean entirely different things. An "inkan" is the imprint left on the paper or document when it's stamped. On the other hand, a "hanko" is the seal itself, usually stick-shaped with circular, oval, or square cuts.

The 3 main types of hanko: a quick vocabulary list

There are 3 types of hanko used in Japan by individuals and corporations. Each serves a different purpose.

A registered seal is perhaps the most important among personal and corporate seals. You use it when buying or selling land, real estate, a car, or creating an official document such as a will. It's also used when establishing a company or taking out a loan.

To use a hanko as a jitsu-in, you must first register it at a municipal office of the city, ward, or town in which you live. Once the seal is registered, you can use it for the first time as a jitsu-in.

Registered seals are considered equivalent to one's identity on official documents, and one should take precautions to avoid losing or damaging the seal.

A bank seal is a hanko that has been registered at a financial institution when opening an account. This seal is used when changing registered information, verifying one's identity, and withdrawing money from the bank teller counter.

While using a bank seal is the norm for many Japanese banks, some major financial institutes accept written and digital signatures.

A personal seal is a hanko that has not been registered at a city office or financial institution. Individuals often use it to receive packages in the mail and sign contracts and attendance records at a company. One can also use a personal seal for simple procedures at municipal offices that don't require a registered seal.

Mitome-in gets the most use in daily life and is often used by all members of a family. However, because it holds no legal power, they are not valid for banks or formal contracts.

What are the requirements for registered seals?

Before purchasing a hanko that you plan to register as your jitsu-in, you should know a few requirements and rules. 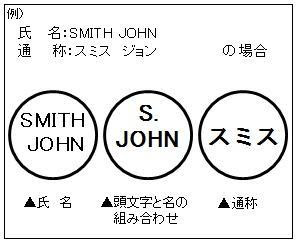 Image. Example of acceptable ways for foreign residents to inscribe one's name on a registered seal from Katsushika city.

For example, depending on your municipal office, the size of your seal must not be smaller than an 8mm square and not extend beyond a 25mm square.

Additional rules are as follows:

How to register your personal seal (hanko) at a city office

Below is a step-by-step guide on purchasing a hanko and registering it at a city office.

Step 1. Customize and buy your hanko.

Although you can buy a ready-made hanko at stationery stores or 100-yen shops, registered seals should be order-made to meet the requirements mentioned in the previous section.

You can customize and order your seal from specialty stores, large bookstores, hanko stores, and even on the internet.

Foreign residents can engrave their name in Roman alphabet or katakana, and there are plenty of styles, materials, and fonts to choose from to make your custom-ordered seal unique.

Step 2. Go to your municipal office and fill out the seal registration form

Once you have your hanko, it's time to head to your municipal office and ask for a seal registration form (印鑑登録申請書 = inkantouroku shinsei sho). Fill out the simple form with the required information and stamp the document with the hanko you want to register as a jitsu-in.

City office staff will assist you if you have trouble reading or filling out the form. Simply say, “Shinsei sho no kinyū wo tetsudatte kudasai.” (Please help me fill out this form.)

It’s also a good idea to bring something that shows your address and name in Japanese in case your city office doesn’t allow you to fill out the form in English. 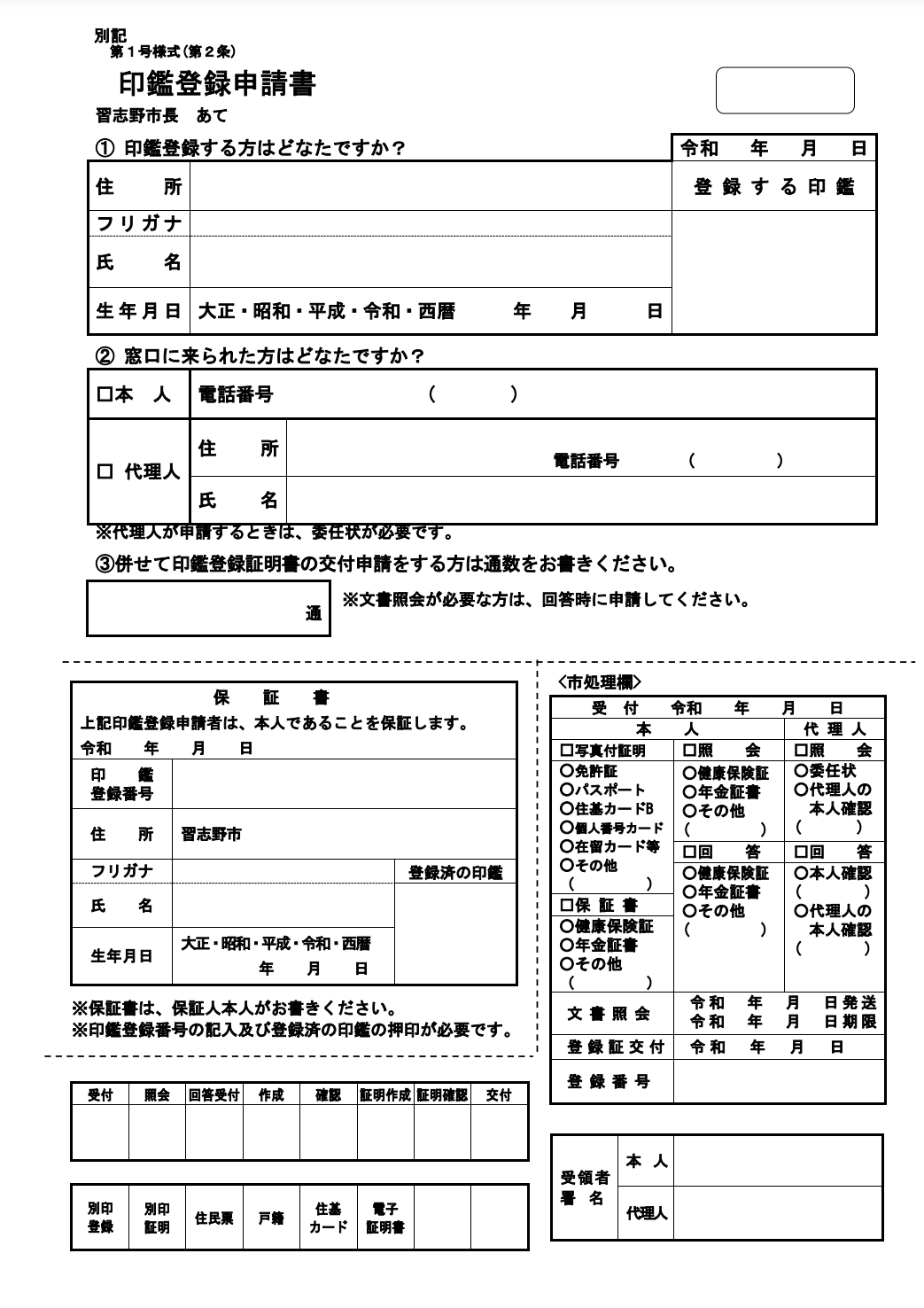 Image. Example of a seal registration form from Narashino city.

Step 3. Bring your filled-out form and ID to the counter.

Submit the completed form and show your ID (passport or resident card) at the counter. Some city offices require a small processing fee (¥50). After payment, you will be issued a seal registration card, which you should keep in a safe place.

You'll need this card to get a seal registration certificate (印鑑証明書 = inkanshomeisho), which is usually required for contracts made with a registered seal.

Using personal seals instead of a written signature may be puzzling for foreigners new to Japan. However, knowing how to register a seal in Japan is still crucial for those involved with corporate and commercial registrations and land ownership.